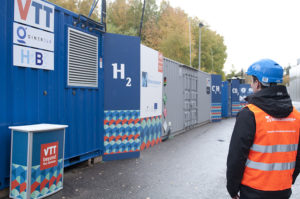 VTT and St1 have launched a unique experiment in Finland aiming to produce hydrocarbons from industrial carbon dioxide, which can be refined to fossil-free petrol, diesel and chemicals.
VTT and St1 will be carrying out pilot-scale experiments at St1’s biorefinery in Jokioinen, Finland this autumn to demonstrate how hydrocarbons can be produced in a climate-friendly way from carbon dioxide extracted from the bioethanol production and from hydrogen produced with water electrolysis. The pilot is due to begin in October and run for approximately five weeks.
The pilot plant consists of integrated mobile containers: a unit for processing carbon dioxide, a hydrogen production unit and a synthesis unit for turning the carbon dioxide and the hydrogen into liquid and solid hydrocarbons.
“Our goal is to create new business opportunities for example to fuel and chemical producers. In addition to piloting, we will also be evaluating the techno-economic viability of a range of industrial processes that rely on carbon dioxide”, explains Project Manager Janne Kärki from VTT. The project is part of VTT’s strategic research initiative to find solutions for mitigating climate change.
“St1 is extremely excited about the project, as St1’s process for turning waste into fuel-grade ethanol also produces renewable carbon dioxide and, on the other hand, as our strategy is to develop sophisticated renewable fuels to replace imported fossil fuels”, says Patrick Pitkänen from St1 Renewable Energy Ltd.
New innovations for combating climate change
“We know what the problem is and how to solve it, and we have the money to do it. The biggest challenge lies between people’s ears. The battle starts with new ways of thinking and new processes. The key is to design resource-efficient, recyclable and climate-friendly products and services. Bioeconomy and innovation are the future. The whole of the EU as well as individual Member States need to act fast to reallocate both direct and indirect subsidies from fossil fuels to these innovations”, says Member of the European Parliament Sirpa Pietikäinen, who will be inaugurating the pilot plant at an invitation-only opening ceremony on 9th of October 2018.
The pilot is part of a two-year project called Bioeconomy+, which is co-financed by the European Regional Development Fund, VTT and a number of partners. All the piloted units and equipment will be available for interested stakeholders to use in other process environments and projects.
Inauguration of the pilot plant on 9 October 2018
VTT and St1 will be showcasing the new research facility in Jokioinen to VIPs and the media at an opening ceremony on 9th of October 2018.
Bioeconomy+ project partners: VTT Technical Research Centre of Finland Ltd, St1 Renewable Energy Ltd, CarbonReUse Finland Ltd, Koskisen Ltd, BioGTS Oy, Jyväskylän Seudun Puhdistamo Oy, Ab Stormossen Oy, Valoe Corporation, JAMK University of Applied Sciences, City of Jyväskylä, Municipality of Laukaa, Town of Kuusamo, Mäntsälän Biovoima Oy, Forus Oy, Suomen Kerta Oy and Ineratec GmbH.
Main sponsor: European Regional Development Fund, Programme for Sustainable Growth and Jobs 2014–2020
Read more about the Bioconomy+ project: www.vtt.fi/sites/bioeconomyplus/